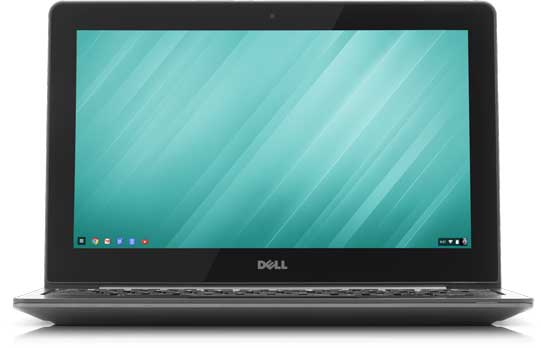 I have to admit that my index finger was an inch away from placing an order for the Pixel about five minutes after Google introduced it last year. But good judgment prevailed and I decided $1200 would be better devoted elsewhere, not least because I had no immediate need for the 1TB of storage (which at prevailing prices could be seen to make the Pixel "free").

I had earlier tested a Samsung Series 5 Chromebook. While I liked its solid and attractive design, and was naturally drawn to the focused and functional elegance of Chrome OS, I was dismayed by its inability to keep up with my typing and a few other shortcomings, the consequence of an underpowered CPU. I followed the slow progress of the platform through its first couple of years, and then its flowering over the past year after the Pixel was released with several variations on the Chromebook theme from HP, Acer, Lenovo, Toshiba, and Dell. Of all of these, the HP 11 appealed most for its beautiful and clever design, light weight, and pretty good build quality...but persistent reports of its limited performance ceiling brought back memories of that old Samsung. I've come to find that there's a threshold of acceptability with most things, and I don't need the biggest or fastest or blingiest to be happy, but rather something reliable that doesn't frustrate or disappoint. And it's helpful if I continue to recognize the tools I use as a good value.

So this is all context for my impressions of the Dell Chromebook 11. While I follow Chrome OS news closely, and was aware that Dell was selling its device into the education market, it flew a bit below my radar because there was absolutely no promotion if it from the manufacturer, nor were there any reports about it to be found. It felt like it would turn out like one of the early Chromebooks that sold a few and promptly disappeared from the market. But when outstanding reviews appeared from The Wirecutter and The Verge, which clicked the boxes I care about, it felt like time to pull the trigger at last.

Like most laptops, the Dell Chromebook comes in pizza-box style packaging that insulates it well from shocks and crunching. There are plenty of unboxing videos out there for the unpacking-obsessed, so suffice it to say Dell does a good job at balancing function and tree preservation.

The Chromebook itself gives a very good first impression. It's a sober charcoal grey with simple, clean lines and nice proportions. Something like a first generation Audi TT. It feels neither too light nor too heavy at about 3 lbs. Dell chose the plastics wisely: they're much nicer than what Samsung, Acer, and Toshiba chose for their models, which gives one a sense of confidence that the thing will not fall apart with normal usage. And this is reinforced when handling the Dell. Its hinge has just the right amount of resistance, and the tolerances just look and feel right as well. Again, in contrast to most other Chromebooks, the body has virtually no flex at all and the seams are perfect. While it's not as solid as a hunk of steel, the screen panel requires much more effort to flex than the Toshiba or Acer. Dell clearly designed this to be durable.

I really like the keyboard. The laptops with which I'm most familiar are an old Sony Viao, a Toshiba R705 series, and an HP EliteBook 2540, all of which I've used extensively, and I've done typing tests on most of the current Chromebooks available today. To my fingers, only the EliteBook has a keyboard I enjoy more, and the Dell outperforms most of the others (it and the Toshiba R705 are close, and the HP 11 is very good as well). The keys are well-spaced, and while they don't have a great deal of travel (which some will actually prefer), they are solid and satisfying to use, with very nice feedback. The trackpad is sensitive and responsive with a fine matte surface that I like, but I haven't used or focused on it enough to say much more about it yet.

The keyboard surround is worth mentioning. Dell chose a plastic that is very much like the back of my Nexus 5 phone, and is brilliant for this purpose. it provides just the right amount of grip for the heels of one's hands, and has a softness that makes this feel like a much more expensive device. It's a bit like enjoying the interior of an Audi in a car priced like a Mazda. 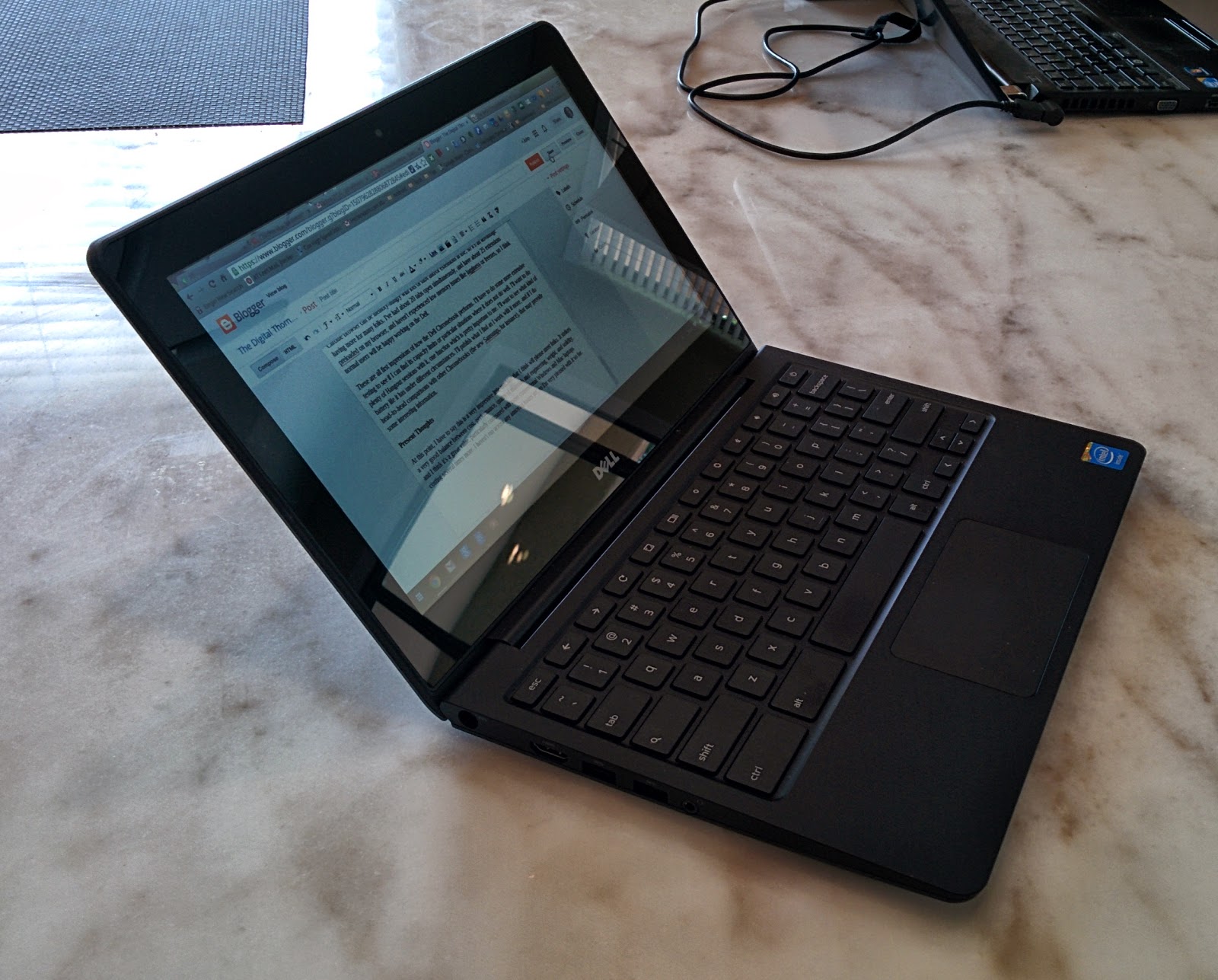 Like most current Chromebooks, the Dell uses an 11.6" LCD panel with 1366x768 resolution, which is about the minimum I'd want in a device used for accessing non-mobile web pages and applications. It has a pretty glossy surface. On the one hand, that means one needs to be careful about placement of bright lights that will reflect off the screen, and on the other, I think it increases apparent sharpness, particularly on photographs and other graphic elements.

There are two styles of color rendition I see over and over again on video panels (from phones to televisions). One is what I think of as Samsung-style, with bright, oversaturated colors that a marketer might describe as "vivid". The other I think of as Nikon colors, which are better balanced, but are more subdued and would be marketed as "balanced". The Toshiba R705, my old Galaxy Nexus phone, and an Asus 23" screen I use display Samsung colors. The Elitebook, my Panasonic plasma TV, my Nexus 5, and the Dell Chromebook are Nikon-style. I find the screen to be very easy on the eyes, and while the brightness can be bumped to maximum without introducing contrast issues, I wouldn't mind it if the control went up to 11.  Viewing angles are pretty good, but not the best I've seen; there's a dropoff point beyond 90 degrees. I think it's very good for a relatively inexpensive Chromebook, nicer than most of the others (not the HP 11, of course), but it's definitely not an AMOLED or IPS screen. I think most people will find it perfectly fine, but some will want more punch. 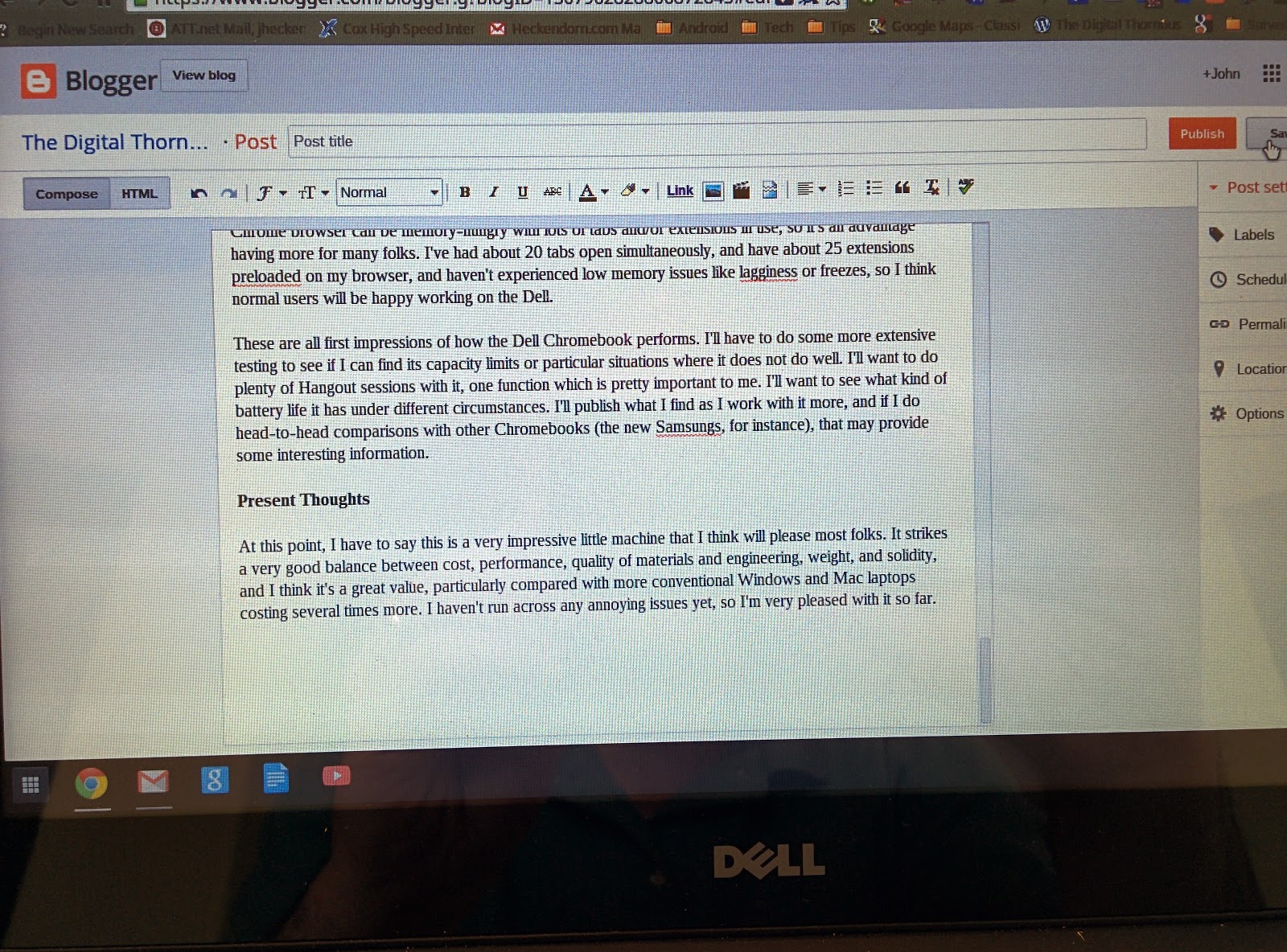 The speakers are downward-facing, but placed at an angle to maximize reflectivity and minimize opportunities for muffling. They're better than average for a laptop with no tinniness, little distortion, but not much bottom-end, of course. Perfectly adequate.

The Dell uses a Haswell 2955U CPU, so like every other Chromebook with the same guts, it flies. I've tested only a few dozen sites and apps, but I can't detect any significant differences between it and Chrome running on an i5 laptop or an i7 PC. Pages render quickly, even troublesome sites like Google+ and The Verge. I can't outtype the screen. YouTube videos work great.

The Dell comes with 4GB of RAM, which is more than most current Chromebooks have on board. The Chrome browser can be memory-hungry with lots of tabs and/or extensions in use, so for many folks it'll be an advantage having more. I've had about 20 tabs open simultaneously, and have about 25 extensions preloaded on my browser, and haven't experienced low memory issues like lagginess or freezing, so I think normal users will be happy working on the Dell.

These are all first impressions of how the Dell Chromebook performs. I'll have to do some more extensive testing to see if I can find its capacity limits or particular situations where it does not do well. I'll want to do plenty of Hangout sessions with it, one function which is pretty important to me. I'll want to see what kind of battery life it has under different circumstances. I'll publish what I find as I work with it more, and if I do head-to-head comparisons with other Chromebooks (the new Samsungs, for instance), that may provide some interesting information.

At this point, I have to say this is a very impressive little machine that I think will please most folks. It strikes a very good balance between cost, performance, quality of materials and engineering, weight, and solidity, and I think it's a great value, particularly compared with more conventional Windows and Mac laptops costing several times more. I haven't run across any annoying issues, so I'm very pleased with it so far. 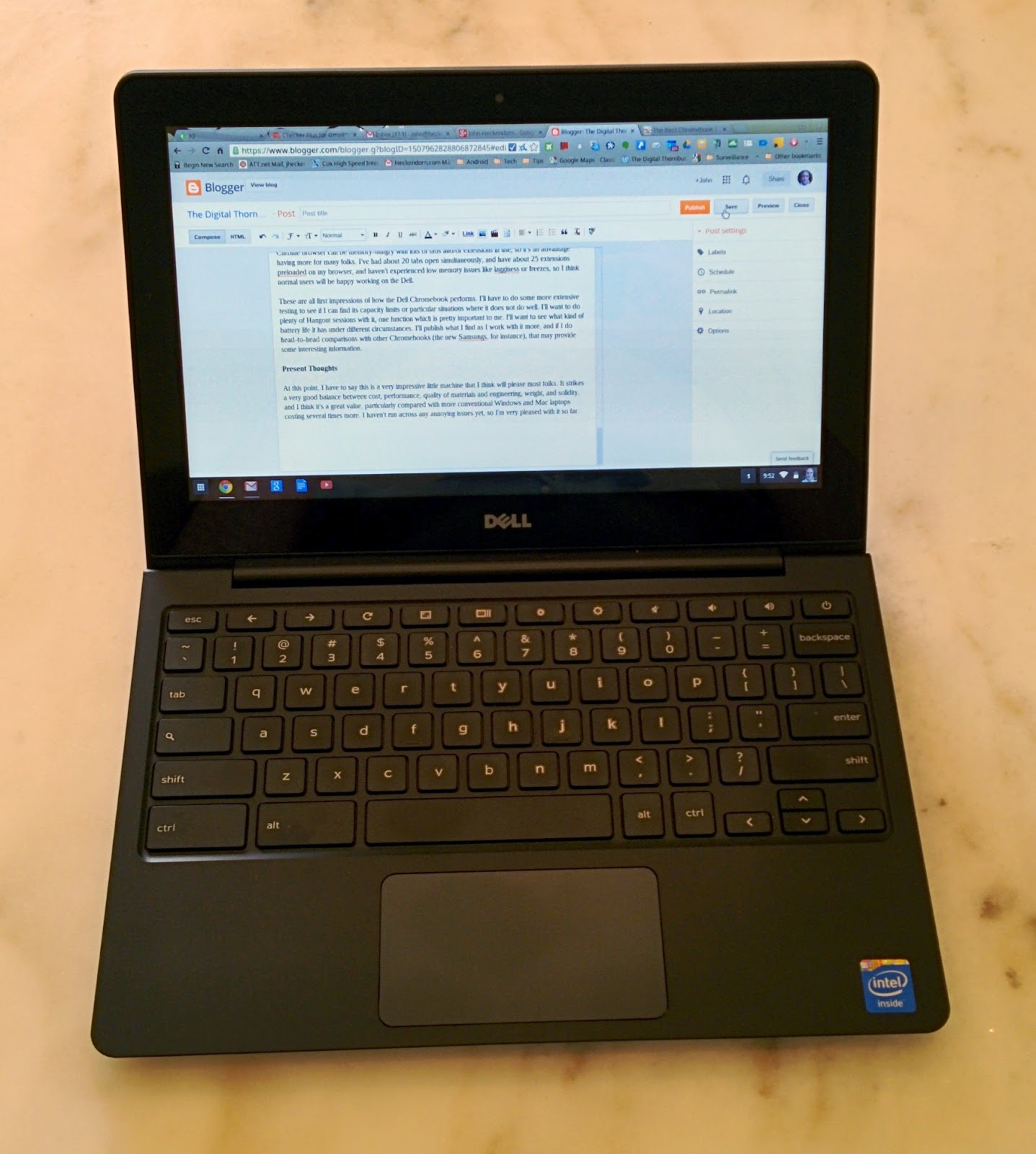